Day Three of Trying Too Hard Week finds Tony Bennett apparently dressed for a Halloween Party.  With record sales slagging and his Woodstock invitation somehow lost in the mail, Columbia Record’s President “strongly suggested” that his now middle aged jazz singer record something contemporary.  Literally, Something.  And an incredibly bizarre rendering of Eleanor Rigby that one reviewer called “Shatner-esque”.  Tony is clearly uncomfortable with the material, attempting off sounding ad-libs that sound like Bill Murray’s lounge singer character.  In researching this album to get the release date, I read that poor Mr. Bennett was so upset at things getting to this point in his career that he literally vomited in the studio before recording began.  Ouch.

It’s also never a sign of a good relationship with your record company when they use the exact same image on the back cover as they did on the front.  And the image on the front cover was totally ridiculous to begin with.  Pin-Stripe bellbottoms, sideburns, and a psychedelic paisley wide-tie is just not a good look, Tony Bennett was never a mod.  Why they have him posed with his feet pointing out with a Look Of Love kind of expression is also beyond me.  No, how you doin’ Tony? 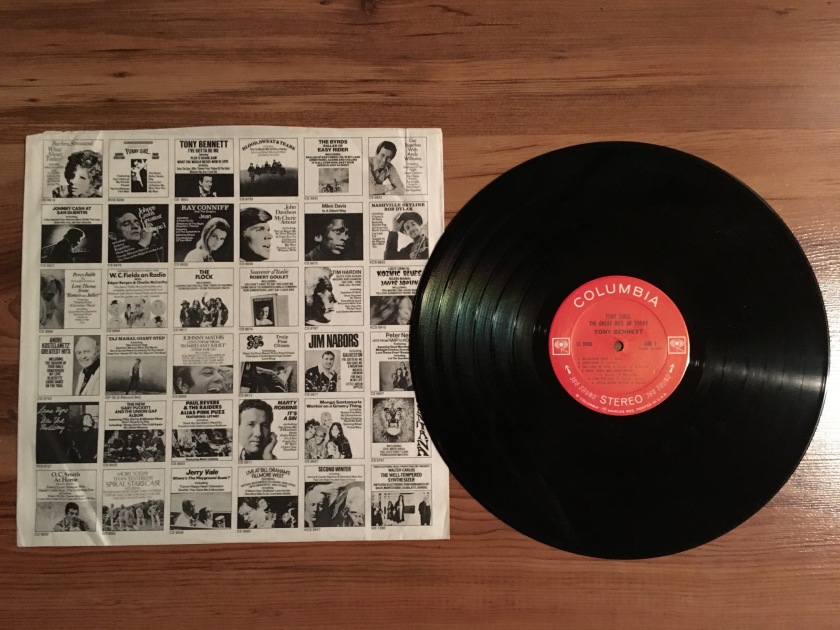 This record’s cover has a special radio station sticker on it.  It’s “Radio Station Service- Not For Resale” warning tells me that this was a well maintained record that would have only been played once or twice, to record a tape loop called a “cart” that would have then been played on the air.  And it’s true, the record is perfect to listen to now.  There’s even a great late 1969 series Columbia inner sleeve that tells me this was an original package.  Thankfully though for Tony’s career, this record is not all there is.